What does that mean?

CSH’s Classical approach is founded on the Trivium; which can be described as three stages of learning (based on Dorothy Sayers essay entitled the “Lost Tools of Learning” – quotes taken from this essay) 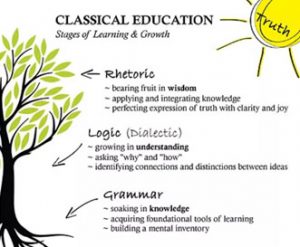 “ The whole of the Trivium was, in fact, intended to teach the pupil the proper use of the tools of learning, before he began to apply them to “subjects” at all.”

“First, he learned a language; not just how to order a meal in a foreign language, but the structure of a language, and hence of language itself–what it was, how it was put together, and how it worked.”

“Secondly, he learned how to use language; how to define his terms and make accurate statements; how to construct an argument and how to detect fallacies in argument. Dialectic, that is to say, embraced Logic and Disputation.”

“Thirdly, he learned to express himself in language– how to say what he had to say elegantly and persuasively.” -Dorothy Sayers “Lost Tools of Learning”

Characteristics of the Three Stages